The Purple Pomegranate, a fine craft specialty store, is featuring the exhibit The Whitefish Fashion Collection in August, with fashion sketches by Nanci Williams and work inspired by those sketches of 15 local artists in their own medium. The Whitefish Fashion Collection is a compilation of drawings of colorful characters made by Nanci Williams as well as interpretations of those drawings by some of the area’s noted artists. The cover features a detail of one of the drawings on a snowy photo of Central Avenue in the background. As you turn the pages you will see that we had a lot of fun putting this book together. There are clever, whimsical, humorous, and inspired works by the artists who collaborated with us for the book. Their work includes painting, mosaic, stitching, collage, sculpture, silver, ceramic, and more – Montana style. 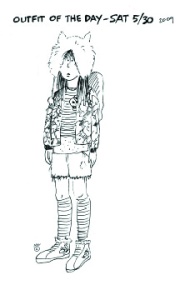 As a lifelong designer and artist, Nanci Williams found the visitors to Whitefish and their outfits looked like animated, life-size canvases walking around the sidewalks and shops as one-woman – or man — shows. It is this diversity and uniqueness that inspired her to begin drawing some of the people who have come into The Purple Pomegranate on Central Avenue where she works. Her first drawing was about 6 or 7 years ago of a young girl who came into the store wearing an intriguing visual salad of textures, patterns, colors and styles. Her attire stood out so boldly that Nanci had to remember her in a sketch. Once she drew her, Nanci began noticing other interestingly garbed subjects walking around. They were action figure models that challenged her figure drawing skills as they moved through the retail space “studio”. Whether it was a hairstyle, a combination of patterns or colors, an accessory flair, or some eccentric departure from whatever is generally thought of as normal, Nanci began making sketches of the different looks that she saw.

When Nanci’s notebook became full of drawings, she, Deb Stika and Ruth Lane wanted to do something fun with them. They came up with the idea for a book and invited other artists to choose a drawing – or drawings – and render them in their own mediums. In doing so, the project has taken on a wonderful flair not only showing off Nanci’s drawings, but also showcasing our friends’ playful interpretations of them. The drawings and interpretations you will see in our book are of women and men, as well as a few children, whose character and style were instantly compelling for Nanci to document. Her sketches are the result of that universal fascination of people-watching – with the term ‘artist’s rendering’ applied loosely and with flair.

Meet Nanci and other participating artists during Whitefish Gallery Night, Thursday, August 6th, 2015 from 6-9 PM. The Whitefish Fashion Collection and other artist’s work will be displayed during the opening and throughout the month of August. The book will also be available at The Purple Pomegranate and on Amazon.

We’d love to hear what you think so leave us a comment. Cancel reply